SMATSA at Vršac has marked 60 years of continuous educational work in training pilots. 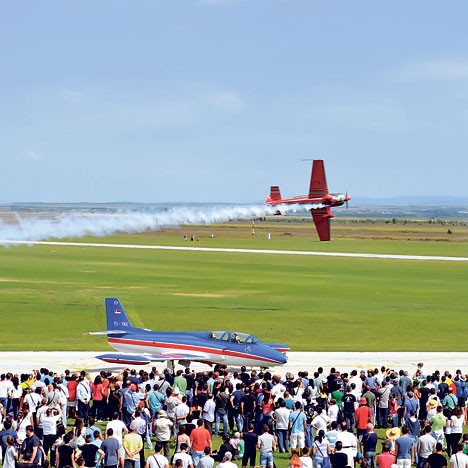 Vršac – There were queues of cars and pedestrians in the airport area of Aviation Academy in Vršac, where the Air Traffic Control of Serbia and Montenegro (SMATSA), now for three years, the owner of former JAT Flight Academy, marked six decades of continuous education in training pilots with the international air show “Vršac 2014”. Continuous vehicle column was long for about five kilometers from the city center for a long time.

It is estimated that the three-hour demonstration of pilots’ skills in the air was visited by nearly 10,000 people, mostly from Vršac and Belgrade, the capital and neighboring Romania, which brought many students on training here.

The crowd was arriving while Ms. Zorana Mihajlović, the Deputy of Prime Minister of Serbia, at exactly 11 o’clock, was opening this air spectacle, which was last time organized here seven years ago. The air show was visited by Mr. Bratislav Gašić, the Minister of Defense, who praised the cooperation with the civil sector for pilot training.

The day was just made for this event, without the Kosava wind, but with favorable air streams, which were once the best option for the planners, for Vršac as a training center, firstly for aviation glider pilots and skydivers, and then for modern pilot training, which is today achieved by using modern aircraft and simulators. Of course, the top instructors are crucial in this process.

In fact, yesterday’s aviation spectacle was dedicated to learning and knowledge.

Six decades in education of pilots in a highly ranked educational institution, the Aviation Academy, is the experience to respect. This was a great opportunity for former students and their teachers to meet, but also to refresh the memory of the late former director of the Flight Academy, Captain Milos Šunjevarić, the founder of modern pilot training in Yugoslavia who helped helped the adoption of high standards in this area, thus making Serbia as one of the European and world leaders. His successor, Mr. Alexander Hadžijević has merits, as well.

Older pilots have calculated that for six decades in Vrsac sky, more than 3,000 students acquired professional and private pilot licenses. Primarily for the needs of domestic airline JAT, since 1972, when this airline took over the control of the Aeronautical Center, students from thirty states were educated here, who then accepted jobs with foreign airlines, and, after additional training, found themselves in command of big jet aircraft.

It often happened that former students, when flying over Vršac, briefly selected the frequency of Vršac Tower, just to welcome future pilots and their former instructors. Many Vršac girls found themselves in marriages with foreign pilots.

There were 50 aircraft in the air show, of different sizes and services, among them, some were old-timers. “Zlin 526 f”, which was operated by experienced aerobatic government pilot Vlada Bulat from Zrenjanin, outlived its homeland, Czechoslovakia, and it is said to be both equally loved by young and old pilots. There are only two more “zlin ” aircraft  flying in Serbia. They were replaced by modern aircraft.

Our experienced pilot, Dragan Amidžić flew on the celebrated training aircraft “Seagull G2”, our first jet airplane in serial production, which was in the very top of the world training aircraft. It was in the colors of Serbian flag. The spectators could see the three popular “Dromader M-18” of the agricultural aviation, commonly used in fire fighting, piloted by Jon Karađan, Žarko Stefanov and Radojica Mihajlović. They simulated water bomb drops coloured by Serbian flag colours on the imaginary fire. Pilot and the owner of an aircraft factory in Kraljevo, Mr. Milorad Martić, demonstrated the possibilities of “sila 450s,” homemade ultra light aircraft made ​​of metal. A squadron of modern training “Cessna 172” aircraft piloted by pilot-instructors from SMATSA Aviation Academy, welcomed the audience. The experienced major Saša Grubač, piloted “Lasta”, and Goran Krnjeta performed a series of complex maneuvers in the helicopter “gazela”.

SMATSA Aviation Academy has its own airport with a control tower (built in 1972 for the Glider World Championships), 1,700 square kilometers of airspace for training purposes only, modern fleet of 20 modern aircraft “Cessna” type, as well as a modern training center equipped with the state of the art simulator.

Due to the quality of teaching and training, but also because of the very low prices compared to the same high-level competition, there are many foreign students.

Photographs and a video – snapshots from the International Airshow „Vršac 2014“  can be seen at our columns Galery/Video.