Home Mediji SMATSA LLC and Rovčanin – the Company and the Manager of the Year!

SMATSA LLC and Rovčanin – the Company and the Manager of the Year! 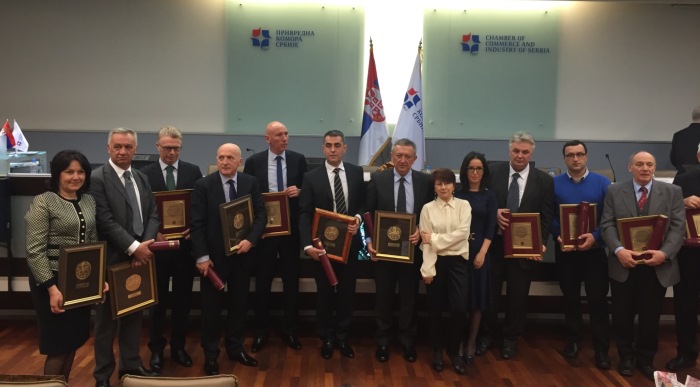 SMATSA LLC and Rovčanin – the Company and the Manager of the Year!

During the special ceremony in the Chamber of Commerce and Industry of Serbia, traditional awards were given to the businessmen and companies who marked the current year with their business policy. The jury of the Club of Economic Journalists decided to give the award to Serbia and Montenegro Air Traffic Services SMATSA LLC and to the Manager, Mr Radojica Rovčanin in the category of the “Corporate Social Responsibility”.

At this occasion, the jury of the Club of Economic Journalists announced to the present businessmen, Government representatives and guests the following:

“Serbia and Montenegro Air Traffic Services SMATSA LLC major business is provision of air traffic services while additional services are related to air traffic control officers and pilots training, calibration of NAV aids and aircraft maintenance. SMATSA LLC was established in 2003 and all its operations are in compliance with national and international regulations, as well as with international agreements. Owing to its highly qualified employees, constant development and technical-technological upgrading, SMATSA LLC became the member of the international aviation organizations and has been integrated in the European Air Traffic Management System as respected EUROCONTROL member. SMATSA LLC controls the airspace above Serbia, Montenegro, the South Adriatic and 55 per cent of upper airspace of Bosnia and Herzegovina. SMATSA LLC is not a budget user but the Company that can be an example to others, since we are earning money and paying it into the budget on different bases. Thus, in the course of 2014, SMATSA LLC paid into the Republic of Serbia budget almost 30 million Euros for taxes, contributions and international liabilities. We also gave 22 million dinars for people who suffered from floods. In addition, we provided availability of 22 aircraft and arranged transport of the huge help in goods. SMATSA LLC CEO, Mr Radojica Rovčanin, made a payment of RSD 500,000 into the account of the Government of the Republic of Serbia, as a personal aid for the flood victims. SMATSA LLC has appropriated 1 million Euros from the money that the CEO, Mr. Rovčanin, managed to collect on the basis of the 10-years old debt incurred by the airlines from the whole world, to be used for the purchase of the Gamma Knife for the Clinical Center of Serbia. SMATSA LLC has also utilised the company aircraft for the transport of the sick children abroad for the medical treatment at the request of the National Health Insurance Fund of the Republic of Serbia and the Ministry of Health. Furthermore, SMATSA LLC has provided equipment for the Children’s Cardiovascular Clinic at Zvezdara, Valjevo Hospital and the Children’s Hospital in Tiršova Street in Belgrade. SMATSA LLC has announced the construction of two Air Traffic Control Towers, in Belgrade and Tivat, with a total value of 10 million Euros, which will present the architectural masterpieces with incorporated cutting-edge technology. During 2014, a new business organisation was put into practice: there was a linear correction and reduction of all salaries, the positions of advisors were abolished and the employees had to return the official company cars and debit cards. SMATSA LLC Aviation Academy in Vršac has been training pilots for the whole world for 60 years now and it is operating at its full capacity. Last year, they organised the only International aero-meeting in Serbia. During the course of the year, SMATSA LLC assisted the soup kitchens in Kosovo and Metohia and bought books for the children from Kosovo and Metohia. All the above mentioned, combined with the professional approach to work, prompted Mr Frank Brenner, EUROCONTROL Director General, to commend SMATSA LLC, in writing, as one of the best ANSPs in Europe. Last year, due to the severe weather conditions which had one day caused the collapse of the entire air traffic control system over Croatia and over 45 per cent of Bosnia and Herzegovina under the jurisdiction of that provider, SMATSA LLC had to take over the control of the airspace over the entire territory of the Republic of Croatia and one part of Bosnia and Herzegovina. SMATSA LLC has received praise from all over the world for that act. During the course of the last year, the air traffic volume was increased by 5.32 per cent, whereas the delays of the commercial flights under the jurisdiction of this provider corresponded to the level of statistical error. SMATSA LLC CEO is Mr Radojica Rovčanin. He has graduated from the University of Belgrade, Faculty of Law. He was employed in JAT for 25 years and worked as Traffic Supervisor, in the Technical Operations Department as well as and in the Sales Department as Domestic Air Transport Assistant Director, Domestic Air Transport Director, Marketing Director, Regional Air Transport Director and Advisor to the CEO for commercial affairs. Mr Rovčanin came to SMATSA LLC from the Agency for Traffic Safety where he held the position of the Chief of General and Legal Affairs Department and Deputy Director.“

The Business Journalist Award was granted to SMATSA LLC CEO, Mr Radojica Rovčanin, who said on the occasion:

“Good afternoon and thank you for the award. I would like to greet you in the name of SMATSA LLC, the company that operates in compliance with European standards and it therefore represents, as estimated by our umbrella organization – EUROCONTROL in Brussels, everything that can be called a success in provision of air traffic services in this part of Europe. We, in SMATSA LLC, had a very successful year behind us by all indications, as you could just hear. I would like to add that last August we achieved a historical maximum of 2,620 aircraft in a single day, which implies that we provided a safe, the shortest and fastest route for about 200 commercial aircraft per hour. How dense the air traffic above us is, we can see from the fact that in the 1960’s we had only 370 aircraft in a year and now we have almost as many in just an hour. What I am particularly proud of is the fact that we take 0 RSD from the budget but make payments to the budgets of the two countries founders on the basis of domestic and international laws and we act as a socially responsible company.

In this way we have set high standards for all other socially-owned property companies which, we are sure, will follow our path of successful and professional attitude towards work.

I am proud of my colleagues who have proved that a public company can also be profitable and professional, and that it can repay the society through social responsibility. Once again, thank you for recognizing our work, which is not our goal per se-but our goal is only achieving results. The most important result, which we are proud of, is safe airspace in our jurisdiction, in 3 countries. In the end, I would like to tell you that we educate pilots who fly aeroplanes and train controllers who guide those aircraft from our Centre, and that I promise to everyone who buys an aeroplane ticket, that we will continue to use some of that money to improve safety, and that we will further reallocate a part of the revenue for the development, the budget and the help to those who need it most. Cheers.“

The president of the jury of the Club of Ecomonic Journalists, Ms Gordana Divnić, a journalist at Tanjug, also addressed all those present, and emphasized that the economic journalists had decided to reward the investments because they are the key to the development of the economy and a higher level of employment. “When we speak about investments, it is common to add that they will contribute to increased export, but, at this moment, it is maybe more significant for us that we commence excess import substitution, because we can make many things better, others are no smarter than us”, she stated. Ms Divnić added that the problem might be that the comparison is initially made with the countries that have always been developed and had a better starting point, and that something should be learned from those that were poor but that managed to develop quickly, such as Brazil.

Mr Dragan Stevanović, a State Secretary at the Ministry of Economic Affairs, stated that the awarded companies and businessmen are the bright spots of the Serbian economy, since they successfully conducted their business and represented Serbia despite the difficult economic conditions. He said that the country is improving the business environment so that Serbian economy could develop. 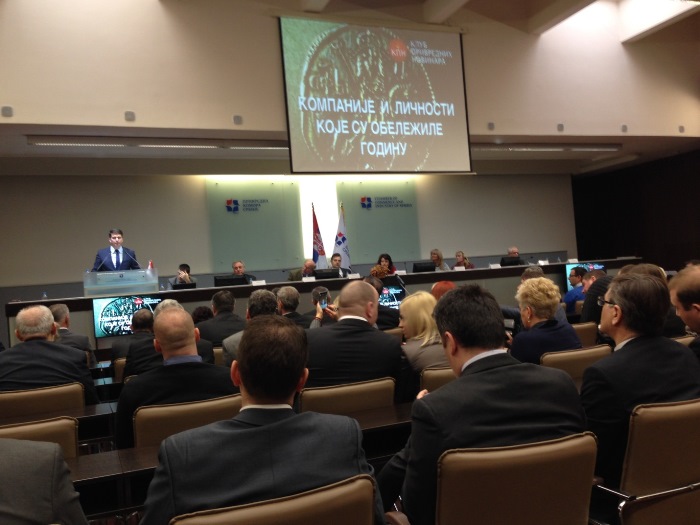 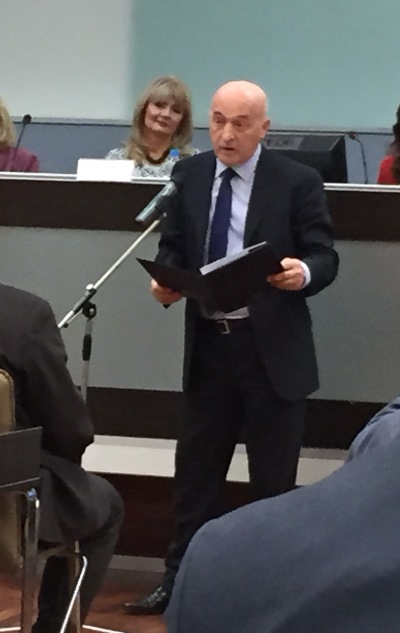 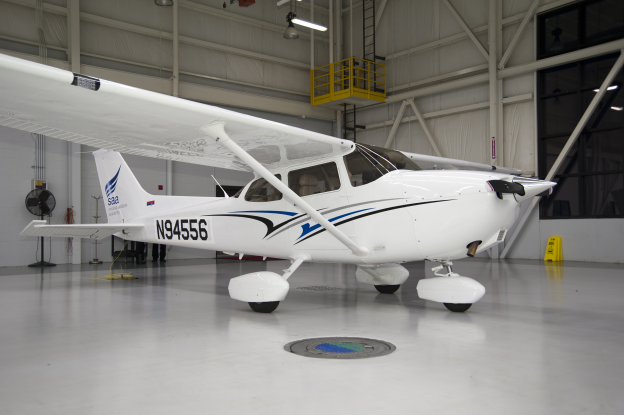 PreviousApplication for ATP (A) INTEGRATED course